erasing in mind: of wax tablets and blank slates 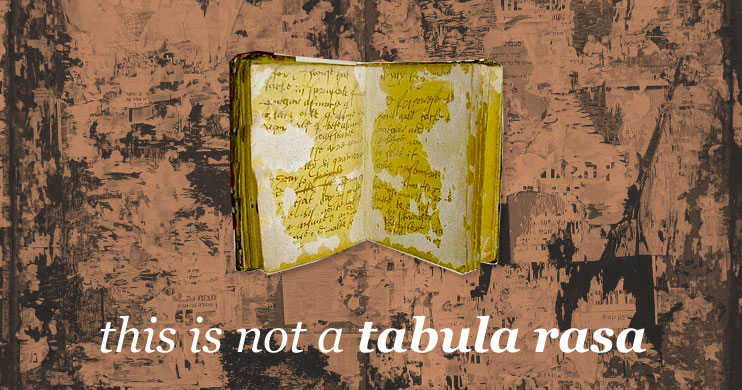 In the nature versus nurture debate, tabula rasa is a powerful image representing the idea of the mind as a “blank slate” open from birth to impression through learning and perception. Yet, the term is somewhat inaccurately translated and oddly restored from its historical context. To be accurate, tabula rasa ought to be translated as “scraped tablet”. To be historically precise, the phrase should be considered within the context of a time in which writing tables were common. John Locke more likely imagined an erased writing table than a blank slate. Suddenly the idea that humans are born with an erased page clear and ready for impression possesses a curious possibility: was the page completely erased?

That idea is not without precedent. Wax tablets, writing tables, Freud’s Mystic Pad. The idea of the mind as comparable to an inscription technology often focused on surfacing the primordial erasure. Anne Whitehead begins her book Memory describing the role of the wax tablet as a working metaphor in Plato and Aristotle’s distinguishable thoughts on memory. For Plato, “the soul enters at birth into oblivion and is covered with a layer of wax on which there is as yet no impression. However, it seems that the wax tablet is not completely wiped clean: there remain imprints of the Ideas, so that we retain a latent knowledge of them.” Important within the very introduction of the inscription medium as a memory metaphor is not only the ability for memory erasure, but an erased memory as the primary condition.

Aristotle was more intrigued by the materiality of the wax tablet and thereby the physical process of memory. “Something is literally stamped into the body, an impression with physiological features, a material trace,” Whitehead quotes Douwe Draaisma‘s description of the wax tablet in Aristotle. Recollection for Aristotle is to access an object of perception from the past. For Plato, the emphasis is on recollecting what was impressed in the wax before the erasure of birth. To Aristotle, “recollection is an autonomous, independent, and self-motivated search.” For Plato, “the process of recollection inevitably involves somebody else.”

The inscription metaphor for memory has had a strong grip on the imagination since Plato and Aristotle. Whitehead’s book is an introduction to the sets of literary and cultural studies that can be classified as memory studies. She follows the inscription metaphor through to contemporary directions in the field to emphasize the continuity in thought on memory. Noticeable in this account is the increasingly subtle connection between memory and the transformations that took place in writing technology since the wax tablet. Reading and writing become simply remembering or forgetting as if electronic writing technology is completely volatile and traceless in effortless reproduction.

Recognizing the shift to collective memory under the inscribing trauma of wars in the 20th century and in reflection on the divergent perspectives of Ricoeur and Derrida, Whitehead argues that the emphasis on memory studies today is footed in forgetting. A precarious foothold, tense with materiality – objects against forgiveness. A tense space held between the hard places of amnesia and amnesty. In amnesia the psychological and material trace is buried and ignored. In amnesty the trace is put out of reach by law. A challenge focused on forgetting without amnesia and forgiving without erasing the medium. An unresolved place. A place in which to “dwell a little longer.” The slate is not blank.

Following the material trace in memory studies in Whitehead’s research draws out two observations concerning erasure. First, thought appears to have shifted from the collective attempt at reading the erasure in the wax tablet to a collective effort at making a proper erasure of collective memory. Second, the shift has the consequence of maintaining the power of the contemporary technologies of inscription as metaphorical conception of memory, but without a thorough material examination of the mechanisms of inscription and erasure. As with the tabula rasa, a conception of the inscription surface as a blank slate has erased the logical and physical objects that are the erasable writing table.

The Spartan Demaratus sent a message of warning to the Greeks of an imminent battle. The message was inscribed on the wood frame under the wax of a wax tablet. This story is commonly told as part of the history of stenography, the practice of hiding a message in plain sight. Whether John Locke was aware of it, his tabula rasa has a hidden message inscribed under a simple layer of translation and contextualization.

This entry was posted in question of materiality. Bookmark the permalink.
Go to mobile version