The video animates the reading and writing processes that government agencies and contractors perform. Each dot in the animation represents a record within the graffiti locations data set that the City posts on NYC Open Data. The placement of each dot in the video is based on GPS coordinates mapped to screen coordinates. The duration represented by each animation is about 12 months, starting September 13, 2010 and ending August 18, 2011.

Sequence of dots: determined by the date the graffiti was read into the data set.
Each dot represents a location logged by a SCOUT inspector or reported by a member of the general public.

Sequence of dots: determined by the date the graffiti was written out of the data set. Each dot represents a location in time visited by graffiti removal crews. The green dots indicate locations where removal crews logged success in finding and removing the correct graffiti. The red dots indicate locations where they were unsuccessful in finding or removing the graffiti.

Same as above, but in this sequence the data set is filtered to represent only graffiti located and removed by the City in the borough of Manhattan.

This final visualization is an experiment. It uses the Voronoi diagram to sketch territories for all the graffiti that the City was unable to find or remove. Each of these red dots generate a space with a boundary defined in relation to neighboring red dots. The boundary is drawn half-way between each of the dots.What emerges over the course of a year are virtual territories for graffiti that eluded the control of the City.

Paths and areas emerge from the sequence of points. Where the tagger leaves their mark, the City’s agents leave traces – in points, paths, and areas – of their bodies. An intentional figure on the wall compared with an unintentional figuration of the city on the operating table. Both are partially discernible, street-generated forms.

“To tag a place is to lay claim to it, to stake it out, to exercise certain self-declared rights to it and rites of self-declaration,” writes Boris Ewenstein concerning the practice of graffiti tagging [1]. These virtual territories might show how the City’s mechanism of graffiti removal is a simulacrum of the graffiti writer’s process of territory production. With their GPS-loaded Blackberries in hand, SCOUT investigators tag the graffiti in geospace – transcribing the discursive material surface into the virtual. With the graffiti location staked, the problem is identified, orderly removal declared, and the control of the City verified.

Yet, not all the graffiti is found and removed by the removal crews. This failure to account for each graffiti location entered may simply represent inefficiency within the bureaucracy – e.g. removal dispatched too slowly or locations misreported. But there are patterns discernible within this visualization that suggest an emerging territory that eludes the map – e.g. the compact spaces that emerge Downtown, between the Upper East Side and Harlem, and along 125th St in Harlem. 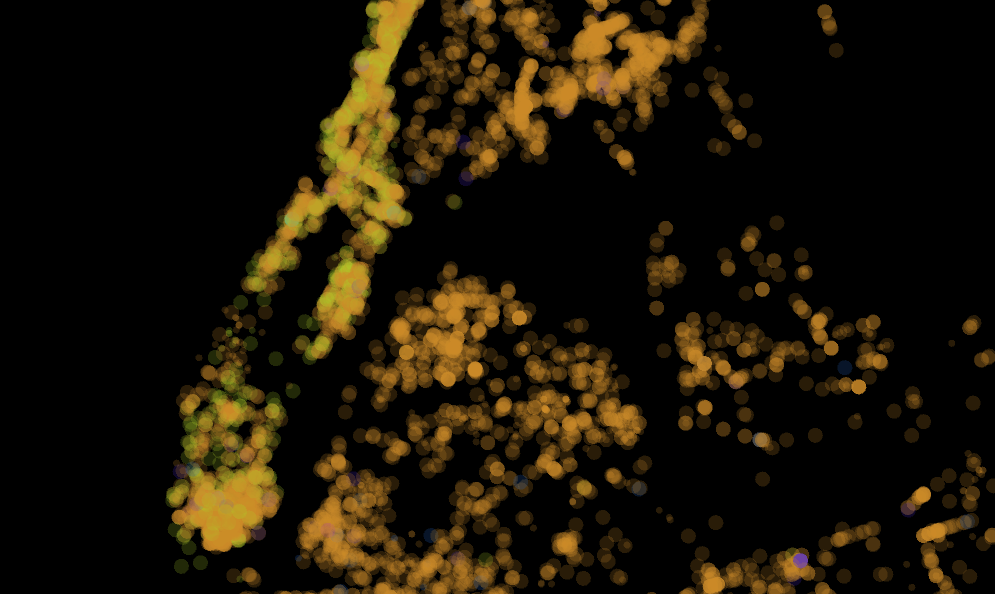 This still-image visualizes all the graffiti locations marked “closed” – locations where graffiti was removed, not found, or property owner refused cleaning service. Each point is given a 20% transparency so that the layering of points create areas of varying intensity. These intensities appear to be additive or subtractive. Example areas of additive intensity includes: Downtown and Washington Heights in Manhattan; Astoria in Queens; Williamsburg in Brooklyn; and Southern Boulevard and Morris Park in the Bronx. Concerning subtractive intensities, Central Park and Lenox Hill in Manhattan are the most obvious examples – but many others appear across the boroughs.

These intensities suggest a certain economy for the distribution of removal services. Of the boroughs, Manhattan has the greatest intensity of removal activity. Yet, as with the paths and areas from the animated visualizations, some other actors and factors appear to be at play, adding to and structuring the conversation articulated in the street. In a following post I will discuss some of these actors and mechanisms evident in the tracings of the City’s graffiti removal mechanism.

Visualization performed in Processing using the following libraries: SQLibrary (for mysql), GLGraphics, and toxiclibs (for Voronoi).

This entry was posted in urban media forensic archaeology and tagged graffiti, visualization. Bookmark the permalink.
Go to mobile version